Safety valves for intercepting gas if the flame dies. 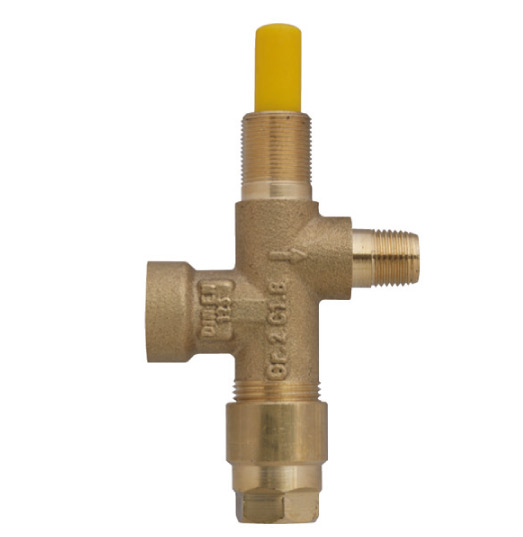 Safety valves represent fundamental components within systems and circuits as they allow to reduce the risks associated with malfunctions and failures that can always occur during operation and that can lead to more or less serious problems for persons and environments that are nearby.
In particular, a problem that can often occur when in contact with systems that carry gaseous fluids is that of leaks. In fact, when the gas does not undergo a combustion process during use, it can lead to excessive accumulation inside a room, greatly increasing the risk of explosions and accidents.
A solution, in fact, is provided by the use of safety valves for gas, which can be of various types, based on their operation and the component to which they are connected:
-    Low pressure safety valves;
-    Block valves with thermal safety valves;
-    Valves for control units;
-    Valves for pressure reducers;
-    Manual reset safety valves;
-    Safety valves equipped with thermocouples.

Thermocouples are components for thermal applications that act as temperature transducers. They are widely used in the industrial field as they allow to detect the temperature within a process, a circuit or a system and consequently to check its correct functioning. For this reason they are inexpensive components from an economic point of view and generally standardized on the basis of European and world regulations. Despite these undoubted advantages, they usually have limitations associated with accuracy.
In general, the operating principle is based on the Seebeck effect, named after the Estonian physicist who theorized it. This principle, in short, is based on two conductors of different nature placed in contact: what is observed is that a difference in temperature generates a difference in potential which is used as a detection signal.

The use of thermocouples in safety valves

Based on the considerations regarding safety valves for gas and thermocouples, it is easy to understand that the coupling guarantees both a more effective control of the fluid and an increase in the overall safety of the system. In particular, the thermocouple detects the lack of a heat source that goes to burn the gas leaving the duct, thus inducing a reduction or interruption of flow avoiding excessive accumulations of gas which can give rise to important consequences from the point of view of health. This means that the thermocouples play the role of "switches" in this type of valve.
Being components of great importance, they are classified with DVGW regulation which is among the most stringent in the field of safety valves on the European continent.
06/09/2021